Delivering results for clients pushes us to work harder at Bell & Pollock, a Denver personal injury law firm driven to succeed. That’s why we’re so proud of our testimonials from satisfied clients. We work tirelessly every day to help injury victims and their families get their lives back on track. And when people take the time to express their gratitude for our work, we truly appreciate it. That’s why we’re delighted to share our clients’ personal comments about us.

Allow us to help write your success story. Contact us. Call (877) 744-5900 or (303) 795-5900 and schedule an appointment. We offer a free case evaluation to all potential clients. We also work on a contingency fee basis. That means you only pay attorney’s fees if you win. It’s that simple. Don’t delay. Contact Bell & Pollock today.

“Champions of the People,” fighting for your rights – That’s the Bell & Pollock way.

Click here to listen to a testimonial for Bell & Pollock from Frank from Denver.

Click here to listen to a testimonial for Bell & Pollock from Nora from Colorado Springs.

Click here to listen to a testimonial for Bell & Pollock from Mark from Aurora.

Click here to listen to a testimonial for Bell & Pollock from Kimberly.

I’ve been listening to so many ads on TV concerning lawyers who:

I called them about a small case injury. No one was interested in taking my case because they were not going to make that much money. They didn’t care about my injustice.

Then, I heard a radio commercial about a firm who was a ‘Champion of the People.’ They took my case because I mattered as a person, not because of how much money I could make for them. They are truly ‘Champions of the People’! 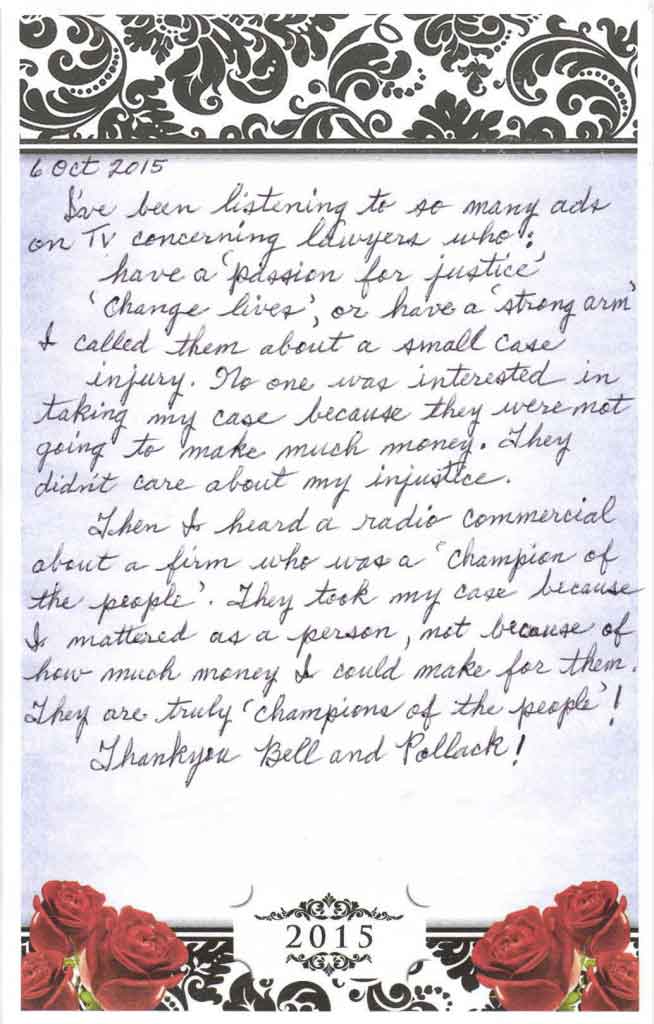 After a terrible job my first “personal injury” lawyer, I hired Brad Pollock to represent me in my car accident case. Brad cleaned up the problems they had created and obtained a great recovery for me. I recommend him to anyone who has been injured in an accident. 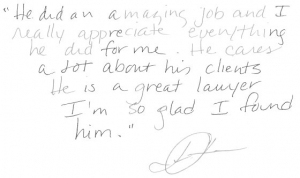 I am very satisfied with the representation I received from Robert Brovege, Jr. I was not treated as another number. My messages were always promptly returned. They were always there to help with any issues. I would definitely use them in the future should anything come up and I would refer family and friends.

Fortunately, I was referred to Robert Brovege by a family member. He and his paralegal always took time to explain everything that was happening in my case, and what the next step would be. It was great knowing that someone was always in my corner. I would highly recommend Robert Brovege.

I was referred to Bell & Pollock, P.C., by my aunt who is a retired Sergeant with the Denver Sheriff’s Department. I not only had a car crash claim, but also had a workers’ compensation claim. Robert Brovege and his paralegals showed total concern for both claims and how they were handled. I appreciated that my attorney was very truthful when it came to good and bad aspects of my claims. I would undoubtedly refer people to Mr. Brovege.

I am happy with the personal attention that I received from Bell & Pollock on my automobile accident case. Bell & Pollock successfully negotiated a settlement with the at fault party’s insurance carrier. Bell & Pollock made the entire process less stressful for me.

Bell & Pollock have treated me with respect and concern.  Gary and Hollie have listened to me, answered my questions and guided me through the lawsuit process.  Hollie has always kept me informed and has gotten back to me with answers and guidance.  I have already recommended Bell & Pollock to others.  I expect to reach a fair and reasonable settlement through their representation.

Dale and I just want to thank you for your help, effort and consideration you gave us on Dale’s case. Sometimes it’s not said enough, but we greatly appreciate everything you have done for us. Thank you again for a job well done.

Bob demonstrated creativity and an underlying tactful approach in the case he worked for me.  He worked well with other members on the staff that allowed the case to move very quickly and Bob was able to cross all the T’s and dot the I’s.  With that being said, we were able to get the case closed in a timely fashion and we settled for an amount that made me very happy.  I would definitely refer Bell & Pollock for any legal representation.

Gary and Hollie at Bell & Pollock live up to their motto “Champions of the People.”

They have worked all hours of the day, night, weekends and holidays assisting me with personal injury accident claim and related disability issues.  As a single parent to a six year-old little girl I feel great comfort in knowing that Bell & Pollock are here to help us through these difficult times. Thank you for all you do!

I sustained serious injuries after a collision with a hit and run driver.  Bell & Pollock represented me in my lawsuit against the at-fault driver, and helped settle my underinsured motorist case with my automobile insurer.  I am very happy with the representation that I received from Bell & Pollock.

Bell & Pollock did a tremendous job on my Worker’s Compensation case, totally exceeding my expectations.

Click here to listen to a testimonial for Bell & Pollock from Kenny.

Click here to hear what listeners are saying about Bell & Pollock’s radio show on KHOW.